For a while, I’ve been looking for an e-reader to complement my evening routine. I’ve landed on the Boyue Likebook Ares.

I’ve been using the Kindle paperwhite previously, and it works great when reading books. However, there were some deficiencies:

Low resolution for comics and manga #

I like to read manga, and the paperwhite has a resolution (1080x1430) that is too low to read some of the smaller characters clearly.

Even the larger Kindle Oasis has a resolution of 1264x1680. Which is only marginally better.

What is frustrating about modern e-readers is their tendency to not include some form of expansion storage. It’s understandable that the current standard of 32GB is well beyond what most need for e-readers, but with a single volume of manga taking up to 100MB, and a series in manga lasting 30 volumes or more, I wanted a system that can potentially store much more.

Very few support native storage in the hundreds of gigabytes, so SD card support was the alternative requirement.

I purchased a Mobiscribe a while back because I was loved the idea of writing digital notes and saving some paper. I don’t really use this feature, but having the ability to use it to take notes would future-proof it if I ever wanted to try it again.

The Ares has worked well for my purposes. But there are enough minor issues that I think are worth considering before a purchase (see below).

The Ares has Wacom support and comes with a pen, which enables it’s use as a notetaking tablet.

In addition, the Ares has a resolution of 1404x1872: much larger than any Kindle, and the highest of an e-reader with an 8 inch screen. 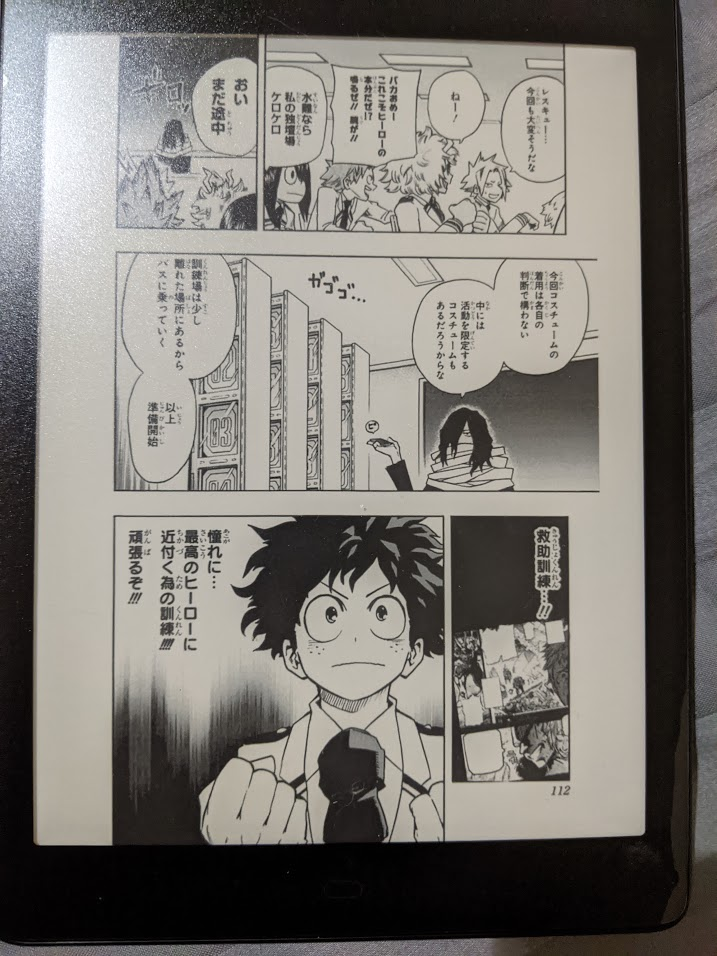 The Likebook Ares in action, with some Manga to illustrate the resolution.

When I ordered from Amazon, the Ares comes out of the box with:

SD card support is for microSDXC, not 128GB as stated #

The first thing worth noting is that the product description calls out support for up to 128GB sd cards. The reality is that the Ares supports microSDXC cards, which can theoretically go up to 2TB. I have tested this with a 512GB Samsung EVO

Possibly only some SD cards supported #

The first Ares I recieved had an issue with reading most of the SD cards I owned. After looking at some forum posts, this seems to be a theme.

My reccomendation is to purchase the Samsung EVO’s stated above, as it’s been verified to work.

Ghosting with some applications #

I believe this is due to apps being used on the Ares that aren’t designed for e-readers, but there is some level of ghosting on some applications (inoreader for me).

The operating system allows you to tune the refresh logic and configuration, which helps somewhat. But it’s not perfect, and it may bother some people.

Battery does not last without some significant tuning #

With both the Kindle and the Mobiscribe I was using previously, the batter would last on the order of weeks, with the devices unlocking quickly (within 1 second) of me interacting with it.

With the Ares, leaving it on (even with a screensaver) would drain the battery in about a day. Thus Boyue added some battery saving options that one can toggle:

There is also a battery saver mode, which slows down the device noticeably, but not enough to make reading a book painful.

Eventually I found a setting that lasts while also allowing me to quickly unlock it, rather than wait for the 30-second boot time:

On these settings, and using it for about an hour a day, the battery lasts me 7 days.

Despite having to run a defective one, the Ares has been a solid, highly functional e-reader. It’s been able to handle all of my use cases (e-reader, read articles online, digital notebook), and I’m happy with my purchase.