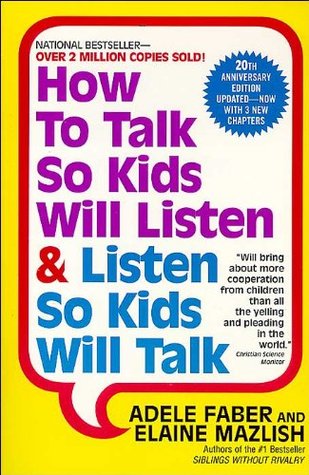 _How to Talk so Kids Will Listen…And Listen So Kids Will Talk _by Adele Faber and Elaine Mazlish is a book about tools to communicate and resolve issues with one’s children.

I find this interesting about every parenting book I read, but there’s always some tips that apply to pretty much anyone, not just children. I’ll call those out as I go.

The book goes through a variety of tips, many of them revolving around a child misbehaving or having a conflict. The authors give specific techniques that tackle conflicts from a variety of angles, including how to diffuse strong emotions, nurturing independent conflict resolution, and slowly changing chronic negative behavior.

I’ll focus on a few that stood out for me.

Studies have shown that children are able to cope better with their emotions if they have a way to describe it. By being specific with the names and describing them (“It sounds like you’re frustrated”), a parent can apply a dampener and expand their child’s vocabulary at the same time.

Give the Child Time to Vent and Brainstorm #

One of the major themes in the book is nurturing independence: giving control of a situation to one’s children, and also the opportunity to come up with their own solution, builds conflict resolution skills that do not require direct intervention from the parent.

As a parent, I find this one a little difficult to uphold. There is an innate desire to be there for your children, and it is hard to toe the line between negligence and helicopter parenting. I often find myself wanting to do something for them, for example linking trains together when they’re struggling, or immediately jumping into a conflict.

Nevertheless, the authors advise giving the child some time to think about their own solution before giving them yours. For example, if a child asks the parent about whether they should go to their best friends sleepover, even if they don’t like the other kids, give the child some time to consider why it might be important to go, and see if they make a reasonable decision by themselves. If they come to a decision that you disagree with, that’s the time to start involving your own opinion.

The goal is to raise a child that can make these decisions on their own. By having them work it out with the parent observing rather than dictating, The child can build their own problem solving skills in a safe environment. This is preferable over the child having to scramble to grow these skills the first day their on their own.

As an analytical person, I often forget that when someone wants to talk, it’s often to vent about their own emotions, rather than necessarily brainstorming a solution.

In a conversation around a distressing situation, giving the other person time to fully vent about what happened, and letting them brainstorm out loud their own solutions, could be be a better option than giving your own opinion. It could also help nurture independence, if this is a professional manager / individual contributor relationship.

Have Children Draw Their Feelings #

When a child has extreme emotions, it’s difficult to move from that point to discussing the situation and emotion more reasonably. The authors offer drawing emotions as a solution. Basically giving a pencil and paper to a child and asking them to draw their feelings. Keep having the child draw their feelings until they get into a better mood.

I haven’t had the opportunity to try this myself (mine is too young to give those type of instructions to), but I’m taking note on anything that can help with dealing with strong emotions.

Oftentimes, our off-handed comments can reinforce behaviors that we want to eliminate. Calling a child a trouble-maker, rowdy, or air-headed makes the child feel like those are the terms that describe them, further acting in that fashion.

The authors suggest refraining from using those types of words, and instead highlighting when the child shows positive attributes.

For example, for a child who seems normally forgetful, calling out a situation where they remembered and being very descriptive is helpful.

“Yes, you remembered to do your homework and bring it to the teacher. You are very responsible!”

This can help counter the pigeon-holing that adults typically do. It’s also good to consider that this type of phrasing can counteract other adults: sometimes it is not parents that use these phrases, but teachers and other family members.

Pigeon-holing descriptions can also come from off-handed comments to other parents. Children who overhear these statements can be affected as well.

As adults, we often get typecast into specific roles, and words that describe those attributes might pigeonhole us just much as it does for children.

If you’d like someone to change, I think calling out when that person exhibits those changes, and thoroughly describing it, is a great way to reinforce positive behavior.

A common frustration comes from children not listening to their parents, especially in a time-sensitive situation.. Maybe a child does not want to stop what they are already doing, or they refuse to negotiate on a friend coming over.

When it’s impossible to make both sides happy, the authors recommend offering alternatives and letting the child choose one. In additiona to clarifying the original choice is out of the question, sometimes that little bit of control can help your child be more cooperative.

The example in the book is a friend of a child who refused to get out of a tree house to get picked up. In this situation, the mother offered the friend two choices: he could go down slowly as a sloth, or go down quickly like a monkey.

Effectively eliminating the original choice of staying in the tree, the options offered also catered to the friend’s natural desire to want to play. A simple “come down” did not suffice, but these options led the friend to jump down like a monkey, accomplish the desired goal.

I think the desire for control continues throughout our whole lives. Maybe when dealing with a difficult situation in a leadership position, the right solution might be offering control in an area where one can negotiate. It also helps others feel more invested.

Further on the theme of empowering children and reducing typecasting, the authors do not recommend describing what are likely temporary behaviors as personality traits. For example, giving an out on a child who refuses to say hi by saying they are “just shy” can result in the child internalizing that trait. Instead, using temporary phrases like “When they’re ready” can help the child understand that this isn’t a defining characteristic.

I think this book is a great introduction to multiple techniques on communicating well with children. Everyone has times when they find conflict resolution with their child is difficult, and having the right tools that not only resolve the conflict, but also nurture the child, is great.

I’m looking forward to trying these and maybe I’ll come back with some more thoughts.

click to load comments via Disqus (ad supported and will cause tracking to load. requires javascript).